← more from
FPE Records
Get fresh music recommendations delivered to your inbox every Friday.
We've updated our Terms of Use. You can review the changes here.

Bird, and the Cage 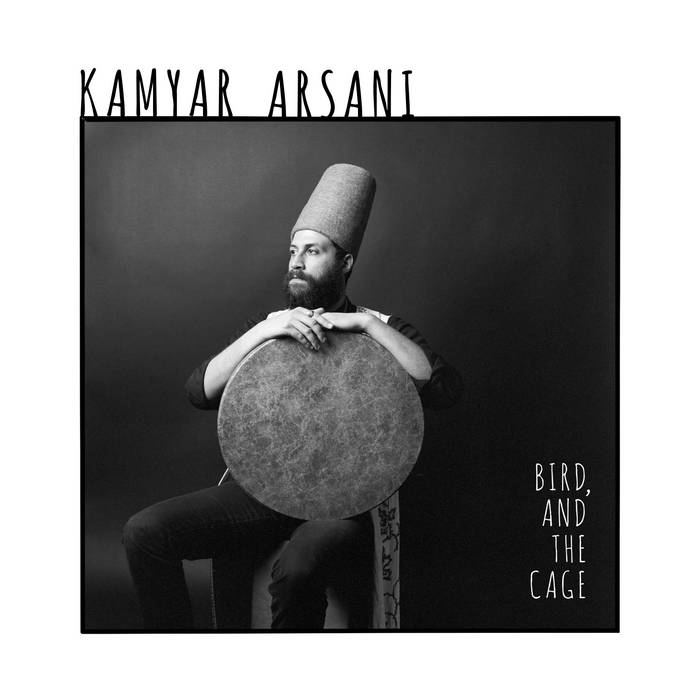 "These songs were written and recorded in November of two thousand and twenty one, in an apartment that was temporary, but filled with permanent melodies. I started practicing to whirl (Sama’) and I heard the universe speak through the wind. I raised the Daf to hold the sun as chains of traveling lights would glow against the dark. We have been contemplating for the past seven thousand years you see." --Kamyar Arsani, 2022

Kamyar Arsani is an Iranian multi-instrumentalist, singer, and songwriter based in Washington, DC. Through his solo work and numerous collaborations, Arsani creates music across a variety of styles, ranging from classical Persian music to genre-defying electronic experimentation. A teacher, performer, and scholar of the Daf ●●● the Iranian frame drum ●●● Arsani has been a featured artist at the Kennedy Center, the Library of Congress, Voice of America, Georgetown University and numerous other stages.

Born and raised in Tehran, Iran, Arsani first studied music with Bijan Kamkar, an internationally renowned master of the Daf. He later studied the kamancheh, a Persian string instrument, under the tutelage of masters Ardeshir Kamkar and Sohrab Pournazeri. Since arriving in the United States a decade ago, Arsani has expanded his circle of instruments to include the drum kit, guitar, ukelele, melodica and various percussion.

Bird, and the Cage is Arsani's first full release for FPE Records, after his track "Gham e-yar" appeared on 2021's A Compilation For Practically Everyone. Here he sets an original poem along with four poems of the Iranian poet Sohrab Sepehri. Daf, acoustic guitar, piano, flute, electronics and Arsani's liquid singing in Farsi evoke hypnotic moods familiar to fans of obscure masterpieces like Scott Walker's 1995 album Tilt and Vangelis's 1973 Earth.

Deep. Light and darkness playing about each other at the surface of a pool, ripples disturbed by the motion of heavenly bodies alone. The sorrow and ecstasy of the liminal edge of life and death, seen at once from inside and out. Get the picture? That's what we're talking about here.

Bird, and the Cage will be available digitally from FPE Records July 15, 2022.

Sohrab Sepehri, the contemporary Persian poet (1928-1980), knows the language of earth and he speaks to me from another universe when I read him. I bring his words to you with the music I hear in my veins.

Kamyar Arsani, a scholar of the DAF _ the Iranian frame drum _is an Iranian multi-instrumentalist, singer and songwriter based in Washington D.C area. Through his solo work and numerous collaborations, Arsani creates music across an array of styles, ranging from classical Persian music to genre-defying electronic experimentation.l ... more

Bandcamp Daily  your guide to the world of Bandcamp

Sampa The Great joins the show to discuss her release, "As Above, So Below".